The eye of Africa. The Film Pioneer Hans Schomburgk

The secret of the Martin Guitar

In the shadow of the Red October. Rachmaninoff, Prokofiev, Shostakovich.

2017 will be the 100th anniversary of the Russian October Revolution. The revolution of 1917 has changed the world for good and had an impact on the lives of millions of people.

The Georgi Pit in Wansleben – The deadly treasury of the Nazis

The Masters’ Houses of Dessau

They are the most famous colony of artists of the 20th century. At their time they epitomize modern living. Archetype for housing projects in Israel, in the USA, South America: The Masters’ Houses of Dessau.

Goths and the world: 1

Black clothes, pale complexion, old symbols – that’s what we see from the outside. But isn’t Gothic more than that? A trip into the “black” universe.

Goths and the world: 2

Black clothes, pale complexion, old symbols – that’s what we see from the outside. But isn’t Gothic more than that? A trip into the “black” universe.

Story of his life: Max Reger

An intoxicated life: Max Reger drank, ate and especially worked way too much. He devoted his entire life to music. The film sketches the short but intensive life of one of the greatest, though not uncontroversial, composers of his age.

Story of his life: Benno Pludra

For more than 60 years Benno Pludra was a unique voice of German and international children’s and youth literature.

White-clad tormentors – By order of the politbureau

During GDR-times young women were held at a clinic in Halle. They were humiliated and got dubious medical „treatments“.
At the Mediathek

Being a world famous composer Verdi’s private life was quite different – he was a farmer. In a Cadillac we cruise through the Emilia Romagna, the region that influenced Verdi with its landscapes, people and cuisine, and where his memory his kept alive until today.

The pope is celebrating his 85th birthday and wishes for a serenade of the MDR choir and and the Gewandhaus Orchestra.

Documentation of the concert tour of the Gewandhaus Choir in India

From the 11th of March to the 18th of March the Gewandhaus Choir will travel to India, following an invitation by the Goethe Institute.

Two teams of researchers – one from the GDR, the other from the FRG – experience the German reunification together in the Antarctic. A spectacular event, even tens of thousands of kilometers away from home.

What music can all speak about; immersing into the mind of the composers

They all meet at the winter sports resort of Oberhof: the high society of the German Empire, of the 1920s, of the Nazi era, and later of the GDR. The film shows the development of a small village that is pregnant with history.

His Majesty is back

15 years: the Fall of the Wall

Inspired by that fervour - 400 years of the State Orchestra Weimar

Children without a past - Lebensborn

The „nordic glorious man“ was meant to be born and raised in the Lebensborn maternity homes. For the children who were born here, though, life turned out anything but glorious.

The candy bomber – 50 years of the Big Lift of Berlin

The Volkswagen industry and its role in the Third Reich

The man without a face – Markus Wolf: top spy of the GDR

Nobody knows anymore that Carl Philip Emanuel Bach was much more famous in his time than his father Johann Sebastian. The film portraits the eventful life of this exceptional and strong-willed virtuoso.

Weimar – the name reminds us of classical German cultural history, of Goethe, Weimar Republic, Bauhaus, and nowadays especially of museums. Yet, does Weimar only live in its past? The director and actor Dominic Horwitz shows us his very own perspective on this old city of culture.

Everyone wanted one, not only in the GDR. Prakticas were much sought after in West Germany, too.

Wolfen near Bitterfeld: Huge old halls from the prosperous times of the 1920s, faded logos, a museum with shiny original machines, high prefabricated concrete buildings and hundreds of stories. All this reminds of ORWO: “Original Wolfen”, the synonym for photo- and filming material in the GDR.
A film by Anna Schmidt

Tracking in ruins – the steel mill of Maxhütte

A 45-minute documentary for MDR broadcasting 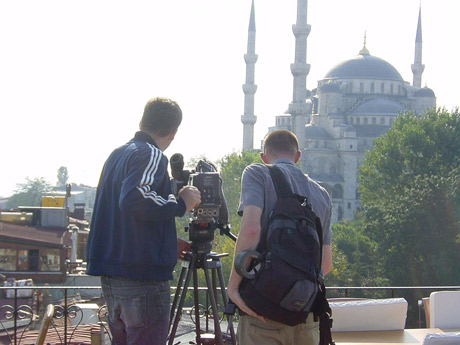 For centuries its construction was one of the biggest secrets of mankind. Now the German historian of architectural art, Professor Volker Hoffmann, disclosed the secret of the eighth Wonder of the World.

After Kazakhstan and Germany have drawn nearer economically during the last few years their relations have now also been intensified on a cultural level – within the frame work of the German-Kazakh Year. Its closing event, at which Wagner was performed for the first time in the Central Asian model state, allows striking a balance concerning these efforts. And schmidtFilm is on site.

The GDR film factory Wolfen had two faces: as a symbol of GDR’s economic growth it was known world-wide: It’s color films were shipped as far as Egypt and India. Produced by skilled female workers, but also by compulsory laborers and prostitutes. The documentary shows both sides.